How could I be nervous about vacationing in paradise? I was off to Vakkaru in the Maldives where the coconut palms sway, the sand looks like ivory satin and the sea takes on so many brilliant hues of blues and greens that sapphire, aqua or emerald cannot describe it properly.

But as a solo traveler, I wondered how I was going to pass the time once there.

It has been fixed in my mind as a destination for honeymooners and families. So what could it offer a single woman who’s never been too keen to add to her crow’s feet by lying on a beach?

Paradise: Petronella Wyatt arrived in Vakkaru alone, but left the Indian Ocean resort (above) ‘feeling like a triumphant goddess’

And upon arriving at Velana International Airport, I certainly wasn’t reassured by the love of the couples in the waiting room or the Gucci-clad parents with young children.

Yet as we took off again, heading for Vakkaru in a tiny seaplane, my mind rose with the arc of our flight path over many atolls, reefs and thatched-roof villas in lagoons. languishing. There are thousands of islands in the Maldives, most are owned by the government and only 350 are inhabited.

When we landed in Vakkaru (meaning Coconut Island) I was greeted like Marlon Brando met islanders in Mutiny On The Bounty – with flowers and fragrant teas – before being picked up by my butler , Sato, who drove me to the villa .

When the buggy came to an abrupt stop, I can say with certainty that it was pure luxury distilled into the stuff dreams are made of.

Looking around me, I saw a sight of unprecedented peace. Walkways had been built over the sea, and all points led to deserted beaches, jungle trails, and glass-like transparent lagoons. 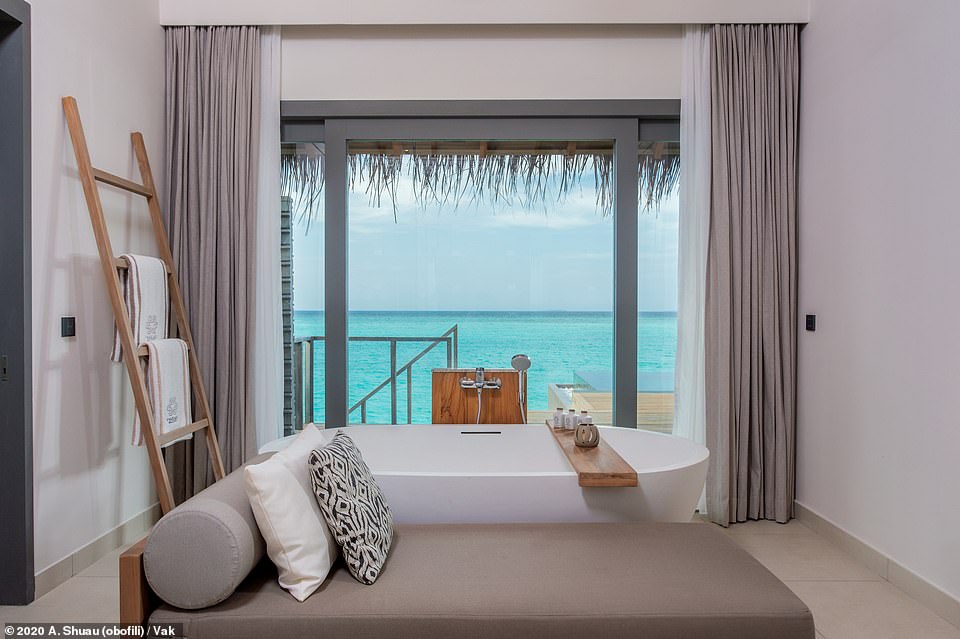 “It struck me that I could be left here for months, completely happy,” says Petronella. Pictured is a villa with a bathtub overlooking the ocean

Upon entering my villa, the first impression was the proximity to the sea. My four-poster bed had a direct view of the Indian Ocean, as did the living room which opened onto a terrace with an infinity pool. The floors were partly glazed, under which multicolored fish swam.

As my stress levels went down, I thought I could be left here happily enough for months. However, Vakkaru had different ideas about idleness.

My itinerary included snorkeling with turtles, treatments at the overwater spa, cooking with the executive chef, tennis with Vakkaru’s professional trainer, wine tastings, lessons in making walnut oil coco and cinema under the stars. This was in addition to a full moon dinner at the Italian restaurant (one of four) and a cocktail at the Lagoon Bar.

Indeed, I was to discover that being alone in the Maldives was the opposite of being alone – the beauty itself envelops you in an embrace.

They even control the time here – guests are encouraged to set their watch to an hour past the actual time, so when you wake up you can still catch the sunrise and enjoy sunset cocktails.

After lazing around in a blissful dizziness and then diving into the sea, I dressed up for cocktails. The Lagoon Bar is sleek but simple, with a jetty, couches, tables with twinkling lights, and a sand floor. I stirred my feet in its warmth and ordered the Maldivian version of an Aperol spritz – a refreshing concoction with a hint of coconut – and waited for the sun to set. 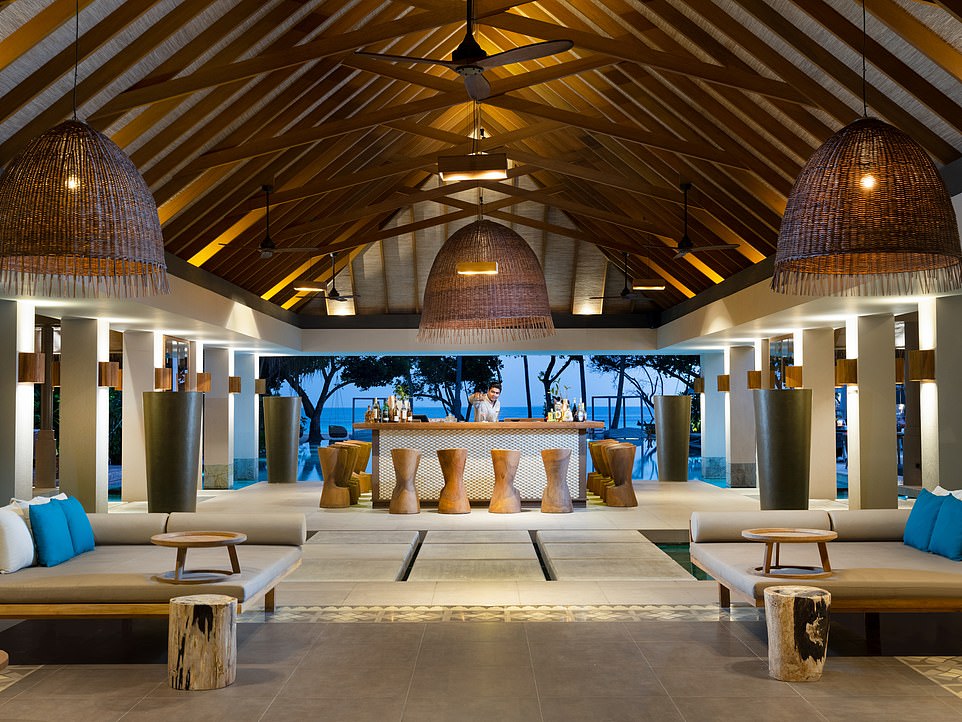 Petronella recommends ordering the Maldivian version of an Aperol spritz – “a refreshing concoction with a hint of coconut.” Pictured above is Vakkaru’s Cabana Bar

It was as if I was at the edge of the world and only had to reach out and grab the fushia orb that soon turned candy pink, then browned copper, then sank into the ocean with reluctance fiery, leaving a panorama of colors in the sky that trembled at the dawn of the night. That alone was an experience to inspire awe, and it was with a sense of wonder that I joined Sato as he led me through the flare-lit jungle paths to the Asian restaurant. .

Everything here was technicolor for the taste buds with a backdrop of stars and swaying palm trees that even Hollywood couldn’t replicate.

I woke up the next morning to a floating breakfast. The cooks had cooked a feast and placed it in a floating heart-shaped basket in my pool – the warm, crispy croissants and spicy omelet sometimes floated away from me as I fell back into the water with laughter childish. 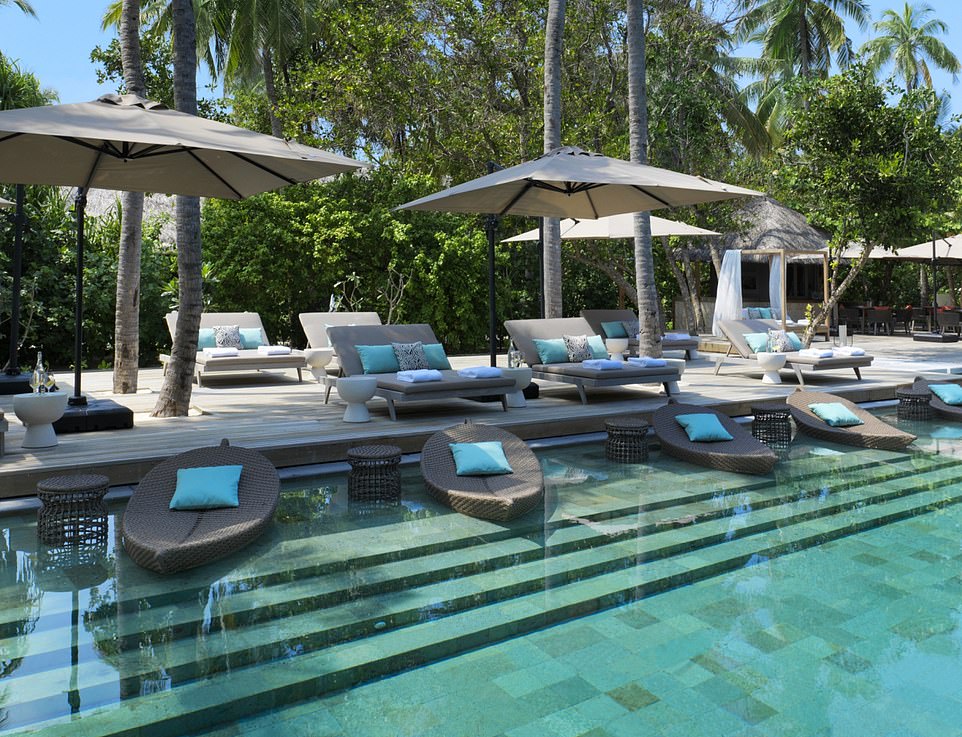 During the cooking class, in the oasis of an organic garden, I lost my heart for Driss, the executive chef.

I’m prone to losing my heart for chefs, and Driss was a king among them. He had prepared hot breads, wraps and spicy salads of prawns and lobster, and together we were cooking fish wrapped in palm fronds.

Vakkaru gives you heightened experiences. Everything is more intense, more vivid, more alive. While snorkeling with turtles, I have touched the wonders of a living reef, and although turtles are forbidden to be touched, their almost golden shells and silvery heads have a visceral effect on emotions.

Then I washed my hair in the outdoor shower, stuck a flower in my messy bun, and cycled to the cocktail party. Staff made coconut oil from raw coconuts while others put on a hilarious hermit crab race for guests. Mine was a non-starter, but it was so much fun that I met some new friends and chatted for the rest of the night.

I started to think that I was better off as a solo traveler, able to do precisely what pleased me. If I wanted to be Garboesque, I could; if I wanted company, it was easy to find. I even had my own movie screening of Hitchcock’s Rebecca on the beach, while waiters brought me popcorn and drinks. In the end, I didn’t want to leave Vakkaru. When they put me back in the seaplane, I promised to leave, and if I have to beg, borrow or steal, I will.

How many times had I heard that it was “sad” if a woman ate alone in a restaurant, or if she spent her holidays alone? Absurdity. And what condescension. The Maldives made me feel like a triumphant goddess. And that feeling stayed with me.

Petronella Wyatt was a guest of Vakkaru. Seven nights in an overwater villa in Vakkaru Maldives with Turquoise Holidays cost from £4,099 pp. Includes half board, flights and seaplane transfers (turquoiseholidays.co.uk).

Take a 15-minute drive from Francisco Sá Carneiro Airport, Porto’s main travel hub, and you’ll reach the remarkable Vila Foz Hotel & Spa; it takes its name from the place in which it is located, one of the most chic areas of Porto. We arrived under cover of darkness but as the morning light crept […]

Venice has an intangible magic. The canals between the 118 islands on which it is built, and under the nearly 400 bridges that connect them, are animated by the tides of the sea – bustling with boats and gondolas, they remain the lifeblood of the city even today. today. This unique geographical point of view […]

Children are not an afterthought at Cordis. Photo / Provided Thinking of a city break for the Easter holidays next month? The Cordis, Auckland might be just the place, writes David Barrington Location: In downtown Auckland, the Cordis is on Symonds St near the junction with Karangahape Rd, just across Grafton Bridge. Style: A large, […]